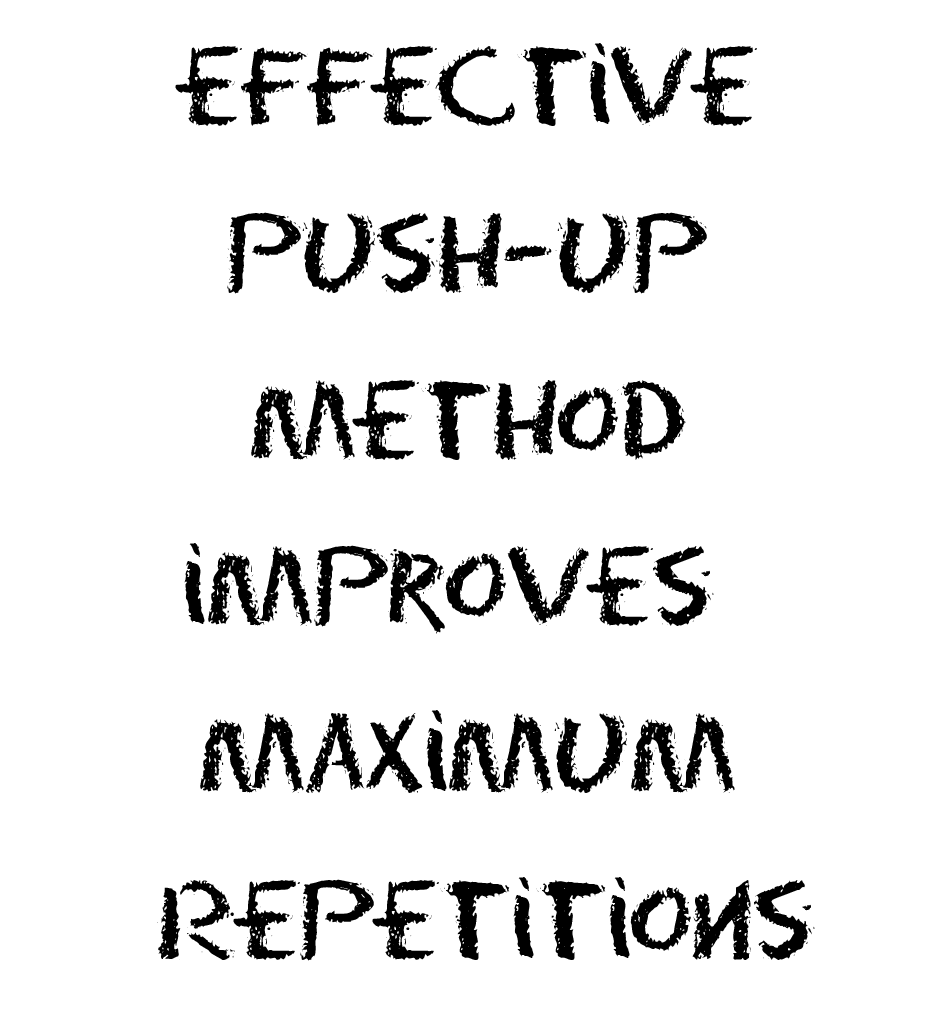 Previously we covered the specifics of Static (Isometric) muscle action and its effectiveness in strengthening the joint at the angle during the push-up exercise where the participant lifts the most weight.

We identified that by holding the Static muscle action at the angle in the down position (right before ascending), the individual may strengthen the muscle at the sticking point.  This further delays the rate of muscle fatigue so that s/he can increase his/her pushup performance.

We will now look at a research that was conducted to show that when one combines the static and dynamic movement during the push-up exercise, there are benefits that are equal to individuals who only perform the dynamic movement.

The subjects consisted of 34 male University students between ages 18-21 who met two times per week for an hour for 6 weeks. Group 1 performed a maximum dynamic push-up performance during each session.

The procedure was repeated until partner two was not able to complete any more push-ups.  Partners then switched positions (i.e. partner one was performing push-ups and partner two was applying the downward force on partner one’s upper back.

Group 3 was a control group. These subjects performed the pre and post-test only.

At the conclusion of the study, Barker noted that group 1 and group 2 showed significant improvements in their push-up performance. Group 3 did not show any statistically significant improvements in their pushup performance. His conclusion was in agreement with previous studies that compared static-dynamic and dynamic training.

When Barker compared the results of the maximum push-up performances between the Dynamic push-up group and the Static-Dynamic group, there was no significant difference.

This study shows that both methods were beneficial at increasing the participant’s maximal push-up performance.

The Static-Dynamic pushup combination performed in this study was Maximal for the duration of six seconds. In other words, the participant who was in the down position, for the duration of six seconds, was unable to ascend because of the resistance being placed on his/her upper back followed by a release of resistance so that the participant would perform a push-up exercise.

Individuals who are unable to perform this exercise with a partner may be able a do so by performing a submaximal version of this exercise.

So, are Static-Dynamic Push-ups Effective for Improving Maximum Repetitions?  Absolutely!

Safety first: Exercise with caution. Please seek medical clearance from your physician before you attempt this exercise below. As mentioned, individuals who have hypertension should be cautious when performing static muscle action exercises as this can increase blood pressure.

The instructions for executing this exercise as demonstrated in the video are as follows:

Although this move is completely submaximal, it’s suitable for assisting with improving the push-up performance. The participant in this case has to endure a longer period during the static muscle action and will likely perform more repetitions because the resistance used is limited to their own body weight.

Further investigation would be needed to determine if in fact the results of this submaximal variation would be similar to the dynamic only push-up performance.

If you do not have a partner try this Static-Dynamic Combination variation.

Please make sure that you breathe throughout the entire exercise.  You may also time yourself while performing this exercise to judge your progress. In the video demonstration, I have elected to the use a Static-Dynamic cadence that prompts you to rise approximately 8 seconds after each static action.

What this does for me is identify my progress by the number of counts I can perform the static-dynamic action.

This is ideal to use so that you will not have to count or watch a clock for the number of seconds.

We Love to Help Build Community

Patrick is the inventor of the PEAMS® Push-up Mat, organizing member of YOUTRAINFITNESS® , an ACSM Certified Exercise Physiologist, and a former K-12 physical and special educator of 10 years who loves to help people improve their PRODUCTIVITY and WELLNESS!

Save $20.00 now through March 31st– on PEAMS®Push-up Mat
Use Code – S20 at CHECKOUT
If you are not satisfied, get FREE RETURN SHIPPING on mat purchase
Our Cookies and Privacy Policy are here.  Please review.
Cheers,
YOUTRAINFITNESS®